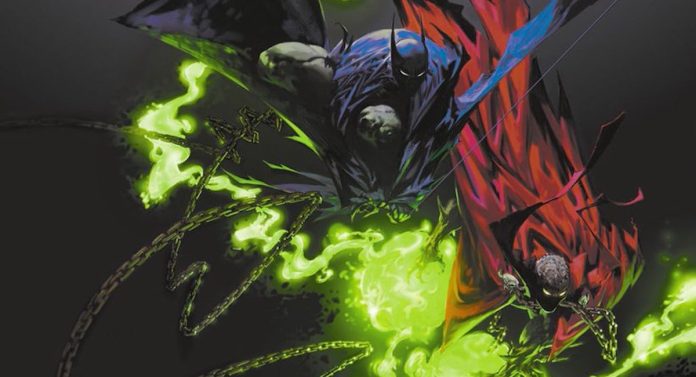 Right this moment throughout the “Picture Comics & SPAWN’S thirtieth Anniversary! Highlight on Todd McFarlane!” panel at New York Comedian Con, author and artist Todd McFarlane unveiled numerous new variant covers for the upcoming Batman/Spawn crossover from DC Comics. The one-shot is written by McFarlane and illustrated by his former Spawn collaborator and former Batman artist Greg Capullo. McFarlane additionally introduced that the December-shipping one-shot shall be carried at Barnes & Noble with an unique variant cowl.

Two darkish heroes, cursed by tragedy, discover their paths once more crossing…however not by alternative! What sinister foe is at work, pitting the Darkish Knight in opposition to the Hellspawn? From the shadows of Gotham Metropolis to New York Metropolis, this epic occasion is the blockbuster you’ve been ready virtually twenty years for!

The Barnes & Noble-exclusive variant can even be illustrated by Capullo & McFarlane. The unique version marks the primary time a DC Comics single-issue launch shall be offered within the bookstore chain since 2019’s Detective Comics #1000.

Take a look at the entire newly-revealed variant covers beneath. Batman/Spawn #1 is ready for launch in shops and digitally on Tuesday, December thirteenth.

Miss any of our different NYCC ’22 protection? Discover all of it right here!

Ray J Was 'Messing Round' When He Posted Regarding Messages